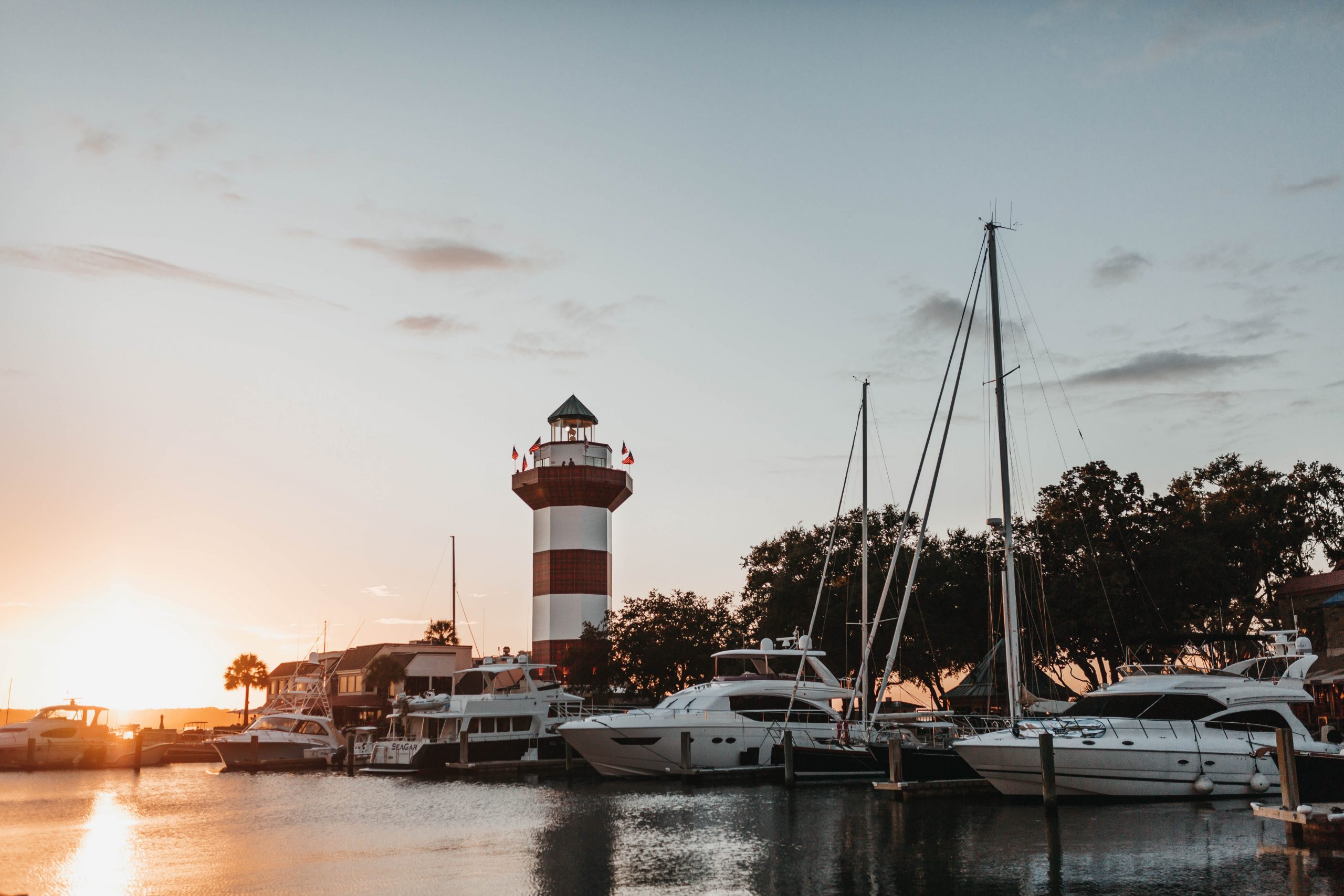 An unfortunately timed case of Covid left my husband and me with a canceled trip and flight vouchers that were going to expire. We didn’t want to let them go to waste, but with the timeline we had to use the vouchers, the never-ending morning sickness I was experiencing, and our schedule, we knew we would only be able to use them after I had our second child. The vouchers were expiring when she was 2 months old so we had to find a vacation that would be relatively easy with a toddler and a newborn. Enter the beaches of the American south.

Tybee Island vs. Hilton Head Island: Both wonderful destinations for a relaxed, sun-filled beach vacation for travelers of any age. Which island will best fit your needs? 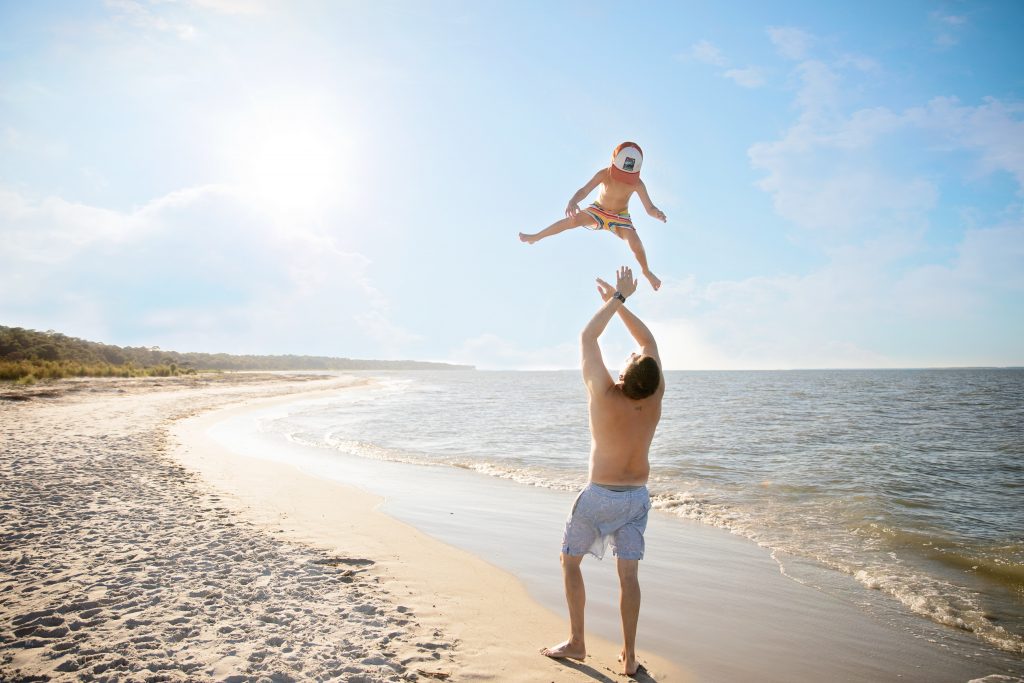 Hilton Head and Tybee Island both have stunning beaches with soft sand and views of the Atlantic Ocean. Tybee Island and Hilton Head also both have similar marine life. Dolphins, sea turtles, and shell creatures are abundant in both locations. If you just want a relaxing beach vacation in the south and don’t care about much else, you can’t go wrong with either location. If you’re a little pickier, you will find some pros and cons to each location, including their beaches.

Tybee Island is a small island that packs a punch when it comes to beaches. Though it is smaller than Hilton Head Island, there are multiple beaches and areas to enjoy the sun and sea. A unique feature of Tybee Island is that there are ocean beaches as well as a few river beaches.

Tybee Island’s main ocean beaches are aptly named North Beach, Mid Beach, and South Beach. The northern end of North Beach shifts into one of Tybee Island’s river beaches–Savannah River Beach. The second river beach, Back River Beach, is at the southern tip of the island and is less well known, making it a perfect spot to visit if you want to see something that usually just the locals do.

North Beach and South Beach are both bustling centers of activity that offer a lot for tourists seeking a variety of activities. Beyond the swimming, snorkeling, and boat activities there are gift shops, restaurants, and a lot of history.

North Beach is closer to Savannah, making it a convenient beach destination for those traveling from the city for a day trip. North Beach is also home to the Tybee Island Lighthouse. In addition to the fun North Beach provides, it is also practical with its public restrooms and parking lots.

Like North Beach, South Beach also has practical amenities. South Beach is typically the most crowded on Tybee Island because of its proximity to the pier, the livelier water, and the additional shopping options it has. It is the only ocean beach on Tybee Island that isn’t a great place to collect shells. Stick to the other two beaches if that is a priority for you. A plus to South Beach is that it does have finer sand than North Beach, though both are popular and exciting places regardless.

Mid Beach is the least popular because it is the least accessible of Tybee Island’s three Atlantic Ocean beaches. There aren’t public parking lots at this beach so you have to rely on metered street spots. There are many vacation rentals and hotels near Mid Beach though, making it an accessible short walk if you happen to be staying in one of them. Mid Beach is appealing because it isn’t very busy and still has the same popular water activities that North and South Beaches do.

The two river beaches are very different but are both relaxing due to their differences. Savannah River Beach is at the northern end of the island and has very calm water. It is a relaxing beach with not much excitement. It is the perfect place to rest for a few hours. In contrast, Back River Beach has strong currents and isn’t recommended as a swimming beach. It is less well known and that makes it a relaxing destination as well.

Hilton Head Island is made up of many public and private beaches. While it is feasible to visit every beach on Tybee Island in one trip, it isn’t likely that you will be able to do that on Hilton Head.

The most popular public beach on Hilton Head Island is Coligny Beach. This location has an abundance of amenities, including free parking, shopping, restaurants, a splash pad, multiple gazebos, chair and umbrella rentals, public bathrooms, changing rooms, outdoor showers, wheelchair access to the water, lifeguards during peak season, and free wifi! Hilton Head Island caters to older guests without children in many areas, but Coligny Beach is not one of them. This fun area is family-friendly and will very likely be the highlight of your family’s trip.

Folly Field Beach and Burkes Beach are nice options if you are looking for a laid-back, relaxing day on the beach. These beaches are typically less busy and don’t have as many visitors as other popular beaches.

Hilton Head has a multitude of resorts on private beaches. If you want to be able to relax in a less crowded stretch of coast a few steps from where you’re staying, then the resorts of Hilton Head have you covered. 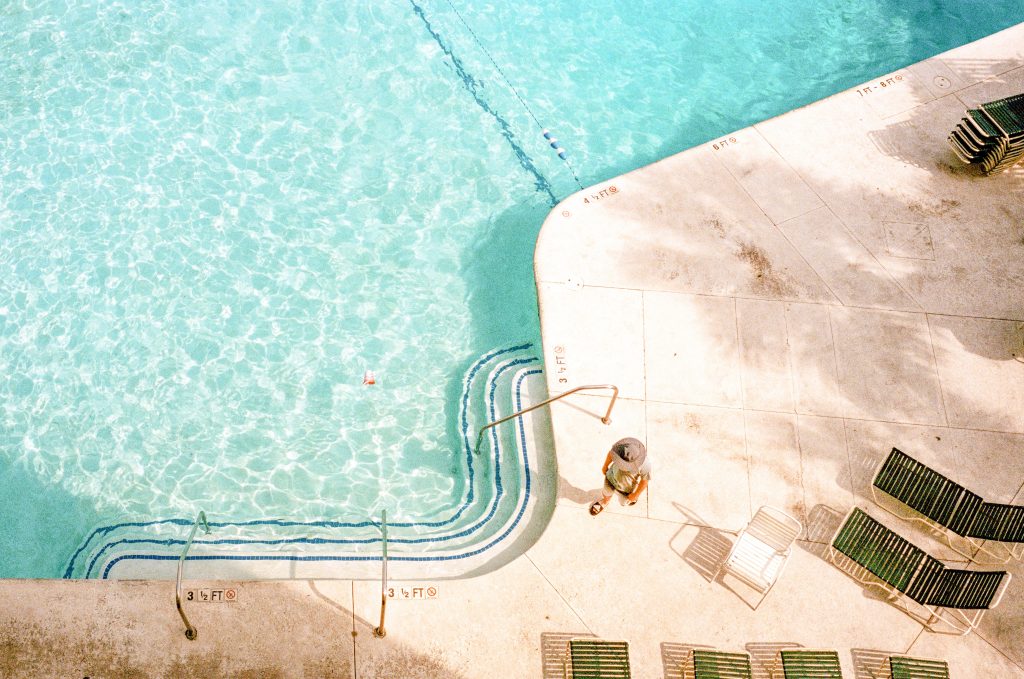 Because of its size, Hilton Head does provide a lot more options for non-beach entertainment than Tybee Island does. That doesn’t mean Tybee Island is the automatic lesser choice. Vacations can’t last forever and both islands have enough options to keep you busy.

Golf Courses: Hilton Head is known for its golf courses, which is one of the reasons this island appeals to those without children tagging along. No matter where you stay on the island there will be a course to visit near.

Dafuskie Island: A nearby remote island town that is only reachable by ferry.

Sea Pines: I know I mentioned this above, but it deserves another shout-out in the entertainment section. Sea Pines has beautiful trails that are easy to bike, walk, or horseback ride along. There are tourist lodgings and locals who live here year-round making it an interesting place to visit. Harbor Town is one of the area’s fun spots. There is a park for children, many gift shops and unique shopping opportunities, the best ice cream we had on the island, various boating tours and rentals, places to eat, an old lighthouse, and live entertainment. It is a fun place to stroll at your own pace.

The Sandbox Interactive Children’s Museum: This is a fun stop if you want to combine hands-on learning, a break indoors, and a lot of fun.

Live Oac Outdoor Adventure Company: This thrilling area is a huge hit for people who want to see marine wildlife and have fun on the water. Enjoy animal sightings while you waterski, kayak, or relax on a boat tour.

Tybee Lighthouse: The Tybee Island Light Station & Museum showcases a lighthouse from the Colonial era. It is arguably the best-maintained lighthouse of its age in the country and is a must-see on Tybee Island.

Tybee Island Marine Science Center: This is another great stop for travelers who want to learn more about the marine life of Georgia.

Captain Mike’s Dolphin Tours: One of the most exciting things to see on an island are the animals. Captain Mike’s tours are an enjoyable way to see dolphins and other ocean animals around Tybee island.

Tybee Pier and Pavillion: The views from here are beautiful. The wooden docks are charming and it is fun to take in the ocean from this vantage point. This is also a great place to try your hand at fishing. If you’re hungry, there are picnic tables so you can take in the sights and eat at the same time.

When visiting Hilton Head, food is a must. Here is a quick list of the best eats on Hilton Head: Palmetto Bay Sunrise Cafe, Skullcreek Boathouse, Salty Dog Cafe (our personal favorite from our trip), Hudson’s Seafood House on the Docks, Frankie Bones, and A Lowcountry Backyard Restaurant.

Tybee Island doesn’t disappoint when it comes to food either. Coco’s Sunset Grille, The Crab Shack, and North Beach Bar and Grille are Tybee Island favorites.

When comparing Tybee Island vs Hilton Head it is important to know what you want from your vacation. While I listed more options for fun things to do in Hilton Head, that won’t matter if you are only wanting to spend time at the beach. Don’t count Tybee Island out just because it has less to offer off the water. Similarly, if fine dining isn’t a priority then Tybee Island is an excellent choice when food is concerned. Both Tybee Island and Hilton Head are known for their exceptional seafood dishes, so you can’t go wrong if you’re a seafood lover. 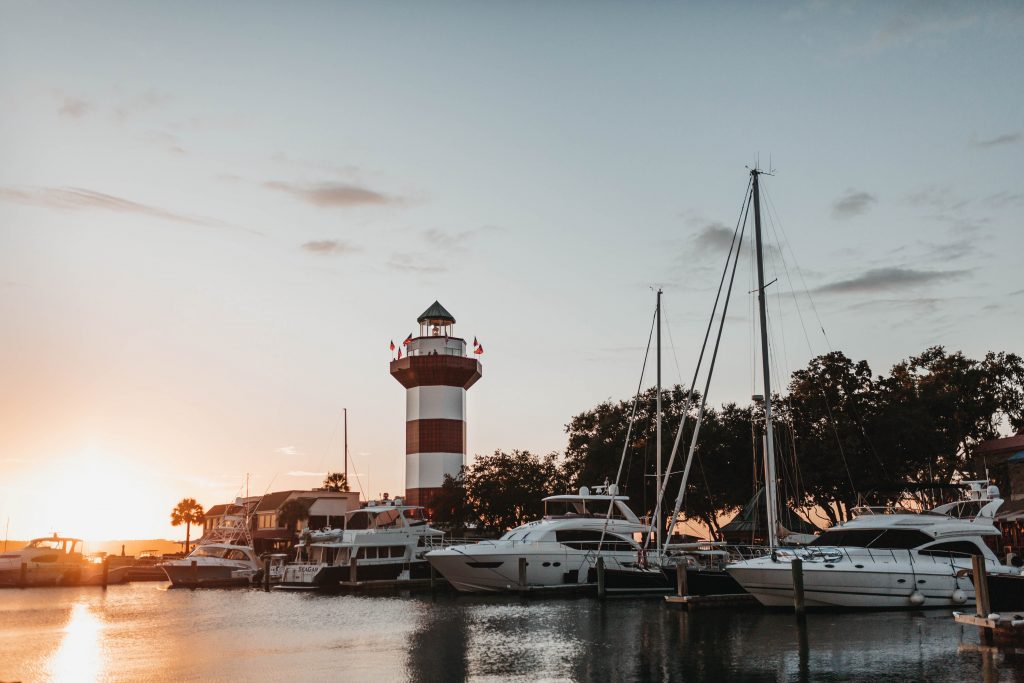 Both locations have no shortage of sun or beautiful summer weather. This makes it hard to pin down on location as “the best”.

I know it’s hard to tangibly quantify what I am about to say, but I am partial to Hilton Head because I like the atmosphere more. It felt like summer break that never had to end. I had never vacationed somewhere where thought, “I could pick up and move here without thinking twice,” until I visited Hilton Head Island. Tybee Island is fun and has an atmosphere to match, but Hilton Head Island has more charm and feels like a place you might never want to leave.

If you want an easy day trip from Savannah, Tybee Island is less overwhelming for a single-day visit and is closer to the city center than Hilton Head is.

Both Hilton Head and Tybee Island are about 40 minutes from the Savannah airport in opposite directions. If you have a rental car and enough time, I would recommend checking out both islands.